skip to main | skip to sidebar

Of Holy Grails and Tinderboxes

Ahab had his whale.

I was cleaning out my bedroom closet the other day, going through a myriad of boxes of old belongings to see which ones should be kept and which should go the way of the Dodo.

After digging through some of my old college newspapers where my film reviews could be found every Friday for about three and a half years, high school clippings, and a bunch of photos of me at prom with my first really-crazy girlfriend, I found the Holy Grail of my youth.

There, still wrapped in their comic bags, was the entire twenty-nine issue run of my Planet of the Apes comics.  Circa 1974, glorious black and white pulp, and still in damn good shape for being more than twice as old as my son.

I pulled a few issues out and leafed through them.  They were published by Curtis and featured two illustrated stories per magazine.  The first part was an ongoing original story set early in the "Apes" universe, followed by an article or two about the movies themselves, which were contemporary to the period when the comics came out, and then the best part of the whole thing:  The continuing adaptations of each film.  Issues one through five detailed the first film, six through eleven chronicled Beneath the Planet of the Apes, and then the last three films concluded the twenty-nine books.

My dad used to take me to the local comic-geek store when I was a kid.  Mr. Fantasy, a big lumberjack-looking dude who sported a huge beard, long hair and a demeanor that usually scared the shit out of me and my young friends, was the purveyor of most of the staples from my suburban childhood.  His store had candy, movie posters, comic books, and if you were lucky a peek at an old Playboy he errantly left on a dusty counter.  We'd go to his store as much as possible, seemingly to get the newest Planet of the Apes monthly, but somehow I'd missed out on issue #11, the finale of my then-favorite entry into the series, Beneath the Planet of the Apes.

The cover of that issue, Taylor shot dead with a blood-streaming bullet hole in the middle of his head and a heavily-armored gorilla holding his triumphant rifle-toting arms over his head in victory, was a fantastic piece of artwork.  Although it bore no resemblance to the actual events in the book, it fevered my pre-adolescent imagination. 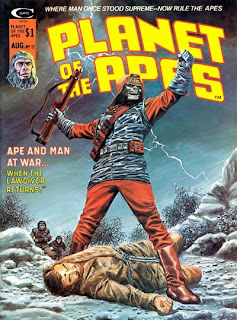 Me and my good friend Jon would sometimes walk the mile journey to Mr. Fantasy's and discuss the important things in our young lives.  Ya know, like what if apes really did take over the planet?

Where would we be safe?

How long could we hold out before being caught?

How cool would it be to see the Statue of Liberty toppled over like that near the destroyed ruins of the Big Apple?

Could we survive on Pop Rocks, Snickers bars and RC Cola?

Would your head really explode if you ate a whole packet of Pop Rocks and shotgunned an RC at the same time?

And mostly, how freakin' hot was Taylor's cavewoman girlfriend?

I looked for issue #11 for months.   We went to several comic book stores;  my dad was becoming as obsessed as I was in finding the damn thing.  Somehow, Jon didn't have it either.  We had every issue from one to the recently-released twenty-seven but neither one of us could find #11.

We were at Midway Mall one Spring day.  It was a sunny Sunday afternoon and my dad and I took Jon with us to JC Penney to buy me some shoes.  Unbeknownst to us, there was a comic book show going on in the mall.  I got my black sneakers and some crappy black dress shoes that my mom insisted that we get when Jon spied a bunch of tables outside the mall entrance to Penney's.

We ran to the tables, my dad in tow.

Have you ever been in the right place at the right time, but still lost out?

I dove in to one set of boxes on the right side of the table.  Jon hit the left side.  I heard a scream and then saw Jon's arms come out of the box with something in his hands.

There was the Holy Grail, right in front of me, and, dammit, it wasn't fated to be mine.

To add insult to injury, he didn't have any money and had to borrow some from my dad.

However, I was excited that I finally got to read it.  Of course Jon, being the friend that he was, made sure that I knew that he now owned the Holy Grail and I was still forced to look for it.  He wouldn't let me live it down that I went right when I shoulda gone left.

Meanwhile, issue #28 had just come out.  We were halfway through the last film, Battle for the Planet of the Apes, and I still wasn't having any luck in finding it.

And you can bet your ass I was looking.  Jon gloated at me.  He would hold the book in front of me while taunting me all sing-songy with his chant,  "I have issue #11 and you don't..."

I went back to Mr. Fantasy's every week hoping to find the book; I felt like Parsifal in his never-ending quest for the Grail.

Well, I had almost given up on my search.  Of course, right?  It seemed next to impossible and I thought that Jon had found the only issue in all of Ohio.

I must have fingered through a thousand boxes of comic books in stores all over Northeast Ohio over six, seven, eight months of searching.  My dad dragged me all over the place and we couldn't find it anywhere.  Jon had dropped out of the game weeks ago; he had his prize, why should he help me?

So, we made one more sojourn to Mr. Fantasy's on a rainy Saturday afternoon.  I went in to find a movie poster for Mysterious Monsters, another staple of my youth.  Bigfoot.  The Loch Ness Monster.  The Yeti.

I had almost forgotten about issue #11, trying to erase the pulp magazine failure from my mind and replace it with other tangibles.  The disappointment to my ten-year old self had been too much.

As I approached the counter Mr. Fantasy leaned over to me.  He was scary and kind of reminded me of Bigfoot.  Not the one in Mysterious Monsters, but the one in the Six-Million Dollar Man that Steve Austin had to fight in slow-motion.  Remember him?  The extraterrestrial-built robot Sasquatch with the bionic eye just like Steve's?

Anyway, he tells me that he just got a big box of comics in and I may want to look through it.

I took his cue and started leafing through it.  A whole bunch of Marvel stuff:  Spider-Man, X-Men, a few DC titles, and then it jumped out at me.

There it was; bagged and in mint condition.

Dad!, I screamed.  I hopped up and started running to my father.  I almost knocked him over as he was flipping through a huge box of  Downbeat magazines.

I shoved the comic in front of him and the excitement on his face was almost as palpable as mine.

Then it hit me.  I didn't have my allowance and panicked at the thought that I wouldn't be able to walk out of that store with the object of my affections.

My throat tightened.  My palms got instantly sweaty.

Omigod!  What am I gonna do?

I was ecstatic.  I couldn't wait to open it up and glance through it; I got into the car and removed it from its plastic sleeve, careful not to tear or crease the pages.  I read it twice within the first hour.  I had supper when we got home.  I retired into my bedroom at seven o'clock, terribly early for a weekend, reading late into the night.

At midnight I put it into the pile with my now-complete set.  I looked at the eighteen-inch stack of comics and marveled at its completeness.  A smile welled up from deep within me.

There before me and safe with his twenty-eight other brothers, occupying a space on my injection-molded, chocolate-colored plastic shelving unit, sat the one thing that I had quested for a seeming forever.

That night, and for a few days afterward, the universe was perfect.  I'd get home from school, go into my room and glance uncontrollably at my pile of comics.  And each time a grin would overtake my face.  I had won.  I  didn't toss it back in Jon's face that we were now again equals; I could have because my issue #11 came harder than his.  It was an epic journey that ended in a musty comic book store in Elyria, Ohio.  It would have made Jason and the Argonauts jealous; my golden fleece was pulpy and bound with two rigid staples, yet a prize worth gloating over nonetheless.

Those books stayed fresh in my imagination for another few years.  I'd pull them out every so often and re-read the whole series.  Sometimes I'd start at "Battle" and read them backwards to the first film, trying to understand the physics of such an epic; the real-worldliness of the Hasslein Time Curve and how going back in time to start the whole thing relied on the third movie, which took place after the events that had already happened. Or didn't yet happen.  It boggled my young mind.

We all have our Holy Grails.

As I got older I put my comics into a box and shelved them with the other relics of my youth.  I was on the quest for a new Grail, the curvaceous kind that smelled good and made my heart pitter-patter much differently than Issue #11 ever could.

For a brief moment in college I had pulled the Grail out of its box and took it with me to a reporting gig for my college newspaper.  I interviewed Charlton Heston and thought it might be cool to have him sign the book for me.  My red-headed girlfriend, and photographer, who had accompanied me on that press trip rolled her eyes when I pulled the comic out of its bag.  At that point I was getting laid on a regular basis and rolled-eyes meant that the chance of not getting any later that night trumped a signed, twenty-year old comic book.

However, I was the only reporter out of a litany of press people that asked him about Planet of the Apes.  Everyone else there only cared about his NRA activities.  I was flabbergasted.  Hello, people...we've got Moses, Ben-Hur and Colonel George Taylor here!  Who gives a crap about the NRA?  Don't waste precious Q&A time with stupid stuff like that!

I wanted to hear his thoughts on the "Apes" pentalogy.

And when I asked him about the movies he perked up.  His left eyebrow raised and he became a little more animated.  It seemed my questions were a breath of fresh air.  I, of course, was the best interviewer that evening and almost asked him to sign my comic when I shook his hand.  But then I thought I might look like a nutball just like the crowd of  NRA weirdos surrounding me.  So I took it home, opened the box and gingerly placed it back  in its rectangular cardboard vault.

So here I sit, cradling a Grail from my childhood.  Its smell and sight takes me back almost thirty-five years.  I am re-reading it from cover to cover, wondering if Taylor will stop those damn dirty apes before they can use the Holy Bomb to wipe us all out.

The Alpha and the Omega, as Taylor said to Brent on page thirty-seven.

The beginning and the end.

Brian
Running with scissors since 1966.